.@JeffGordonWeb was my childhood hero. Really going to cherish racing against him in his final season. #JGFinalLap

@JeffGordonWeb will no doubt be remembered as one of the best ever in our sport. He still has a year to accomplish more.

What @JeffGordonWeb has done for our sport cannot be compared to anything. Thank you jeff

Already said by many peers, but Jeff Gordon impact on #nascar is incalculable. Beyond lofty records, massive sway on driver-sponsor dynamic.

Thanks for all you've done for the sport @JeffGordonWeb. We look forward to battling you for the title this season. pic.twitter.com/wimvrTY3bD

To @JeffGordonWeb THANKS for all you did , do and will do for the sport #NASCAR

Crazy to hear that @JeffGordonWeb is retiring! What an amazing career! Glad I got to race with him!

Thanks for all of the advice over the years @JeffGordonWeb, one of my hero's growing up. Best of luck in 2015! pic.twitter.com/gS0At6mSyj

I feel so lucky to say I have raced against my idol and favorite driver growing up @JeffGordonWeb… ready for one more year against you.

Very few have done as much for our sport as @JeffGordonWeb. Nothing but respect for one of the greatest that's ever raced.

Grew up a @JeffGordonWeb and @markmartin fan. Been awesome to race both of them for wins. Look forward to one more year in 2015.

Woah, big news about @JeffGordonWeb I know who I'm placing my bets on for this championship.

Will brag to grandkids that I saw @JeffGordonWeb race…and point to him as example of how to treat people. So much respect for him. #NASCAR

Hard to imagine this is @JeffGordonWeb last full season. Tons of respect for him and what he's accomplished thus far. A total professional.

Crazy… You're the man!
“@JeffGordonWeb: Letting team know this will be my final year competing for a championship. pic.twitter.com/arqgDMfTni”

I believe everyone looked up to Jeff Gordon growing up. Whether you were a racer or a fan. A legend for sure.

I don't tweet much but, will say I have always been a #JeffGordon fan & proud 2 know such a gr8 ambassador to the sport of #NASCAR #Team24

Re-post of my October blog entry about @JeffGordonWeb. We don't always agree, but I've got a ton of respect for him. http://t.co/k2A6KLig0P

Racing without @JeffGordonWeb in the field will seem odd for sure. Enjoy the last full time year buddy. You deserve it! Thx u for everything

I think I know why @JeffGordonWeb is backing down his @nascar schedule. 4 words. Go!

Never will forget the day my dad introduced me 2 @JeffGordonWeb.
1994 at N. Wilkesboro Speedway.
Told me "This kid is gonna be special". Yep

I was fortunate enough to get to sit next to Jeff at a luncheon in Chicago.I left with an abundance in knowledge and loads of respect. #GOAT

Hearing about @JeffGordonWeb and his retirement makes me look back on what a legend and icon he is! He paved a way for me an few young guns!

Was a fan in 95, still a fan today @JeffGordonWeb pic.twitter.com/iTVyoq3kDt 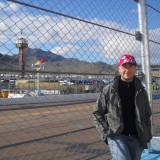